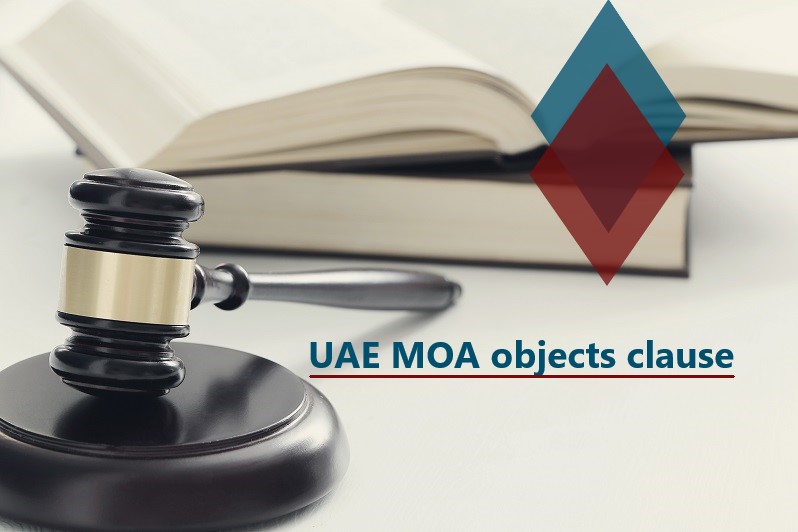 UAE Commercial Companies Law require companies to include an object clause in a memorandum of association. The clause sets out exactly how why company is made and lists the economic activities that it plans on undertaking upon incorporation. If a company acts outside the activities mentioned in the object clause, the actions are potentially voidable as it is acting outside of its powers. The company may even be penalized by authorities and sued by third parties.

A memorandum of association (MOA) of a company is a legal document prepared during the time of incorporation. It defines the relationship of the company, its members, and the general public. The legal document as the charter of a company. It’s required to be stamped or signed by the founding members of a company.

An object clause in the MOA is important for the following reasons:

You should know: Main Clauses Of Memorandum Of Association

Is it possible to change a UAE memorandum of association object clause?

Step 1: Issue a notice for the special board meeting

The notice should be issued no less than seven days from the scheduled special board meeting. The agenda of the meeting should also be sent out to the board of directors. Put into writing that all directors of a company are to be at the board meeting in order to consider a proposal for the alternation of the MOA object clause.

You must know: memorandum of association of real estate company

Step 2: Conduct a special board meeting

The meeting shall have the following as the main goal:

Must read: How To Draft A Memorandum Of Association For A Company

Step 3: Conduct the additional steps (only applicable for a company that raise money from the general public)

If a company planning on amending its memorandum of association object clause has raised money that’s from the general public through prospectus, it’s to follow the extra steps to alter the MOA. This includes passing a special resolution to alter the MOA object clause by means only of postal ballot, sending out a notice for the resolution of altering company objects, publishing an advertisement for the special resolution that will be passed, and giving an opportunity for dissenting shareholders to consider exiting the company.

After sending the notice of the special general meeting, hold the meeting for the company shareholders and pass a resolution for the object clause alteration. Majority of the board should agree to the company MOA alteration.

Step 5: Register the objects alteration with the local authorities

The registration must be done no more than thirty days from the filing date of the special resolution. No alteration of the object clause will be effective if it hasn’t been registered with the local authorities.