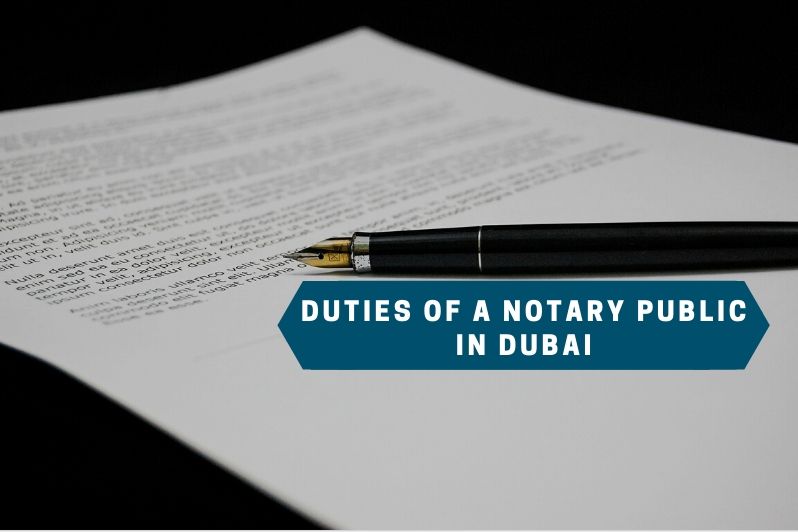 For the general public, they only know that a notary public is a law firm that stamps documents. What’s involved during the process as well as why the documents are stamped are not well-known by most people. There’s also a good number of people that will say they don’t know.

Read here about the  benefits of a notary public

What are the Duties of a Notary Public?

Duties of a notary public include

Notary Public in Sharjah, Dubai or any other emirate of UAE has to record details of notarial acts that are completed within a notary journal. Signers of documents have to sign the notary journal. Notaries may also ask signatories to provide thumbprints on signed entries in their journals. A reputable notary public always considers the maintenance of a journal’s best practice.

The purpose of the activities performed by public notaries is to provide an additional level of trust and verification of documents. Notarization proves that certain documents were executed in the manner that’s binding to all parties involved (signatories to a document).

A public notary also has authority in certifying copies. Additionally, you may seek the help of a notary public in Dubai for legal drafting. Call us today if you wish to know more about notarization in Dubai and how public notaries may be able to serve your specific needs and requirements.

What Does it Mean for a Public Notary to Administer Oaths?

One of the official duties of public notaries is administering affirmations and oaths, pledges on the honor of a person stating that he/she is telling the truth which makes him legally accountable when false information is provided. Under the law, those who take an oath and are later found to be untrue statements will be penalized. Oaths are administered during a court proceeding.

Can a Public Notary in Dubai take Affidavits and Depositions?

Depositions and affidavits, as written testimony, contains statements of facts. They are taken with the witnesses under oath. In the UAE, it is legal to utilize depositions and affidavits as live testimony in proper courts when witnesses are unavailable and cannot testify physically. Because taking written testimony requires technical skill, it should only be done by a public notary. An attorney is often present during court proceedings.

Does a Document Have to be Signed Before a Notary Public?

There are, however, public notaries that won’t refuse the witnessing of the singing of documents provided that there’s sufficient evidence that the signing was done freely and willingly. If you are unsure of the process of your public notary, we suggest you consult with them first prior to signing a document.

What is the Reason why Documents have to be Notarized?