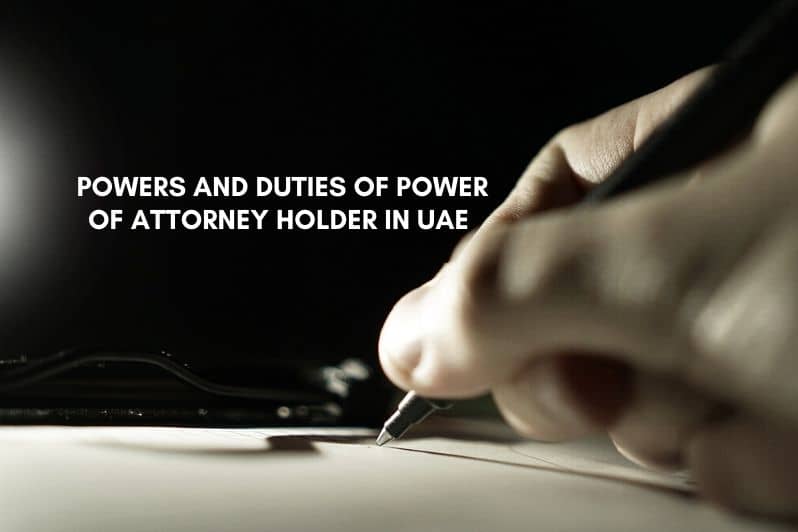 In this article, we’re going to discuss everything you need to know regarding a power of attorney holder’s powers and duties. Let’s start with…

What am I Able to Do if I’m a Power of Attorney Holder?

A power of attorney in UAE can be utilized for almost anything that is legal, but an agent, also known as an attorney-in-fact, will only be able to carry out the tasks that are specified in the legal document he/she signed. A power of attorney is crucial to be written clearly in order to lay out the specifics on what an agent can and can’t do. Third parties that will review the document will also be able to understand what is authorized if the language used in the document is clear and precise.

If you, as a holder of a power of attorney, aren’t sure as to what is authorized to you by the power of attorney you have signed, then you should talk to the principal or person providing authorization as well as an attorney.

What can’t I Perform Being a Power of Attorney Holder?

An agent also can’t revoke or create a will nor can agent perform certain personal services in behalf of a principal who is under a contract (write a book or paint a picture). Likewise, when a principal was appointed as the conservator or guardian for someone by the court, an agent can’t take over the responsibilities of the principal under the power of attorney’s authority.

Is There a Code of Conduct that an Agent of a Power of Attorney Should Follow?

Yes, an agent or holder of a power of attorney in UAE is to meet a set of standards for care when he/she performs duties laid in the legal document. An agent is looked upon the law as fiduciary. This means if the agent or holder of a power of attorney violates the trust or fiduciary relationship created by the POA, the law can punish the agent by ordering payments for restitution as well as punishment money or by jail or probation. Standard of care applies to agents; however, there is also a need to take note of the fact that if a power of attorney has legally authorized a certain act, an agent won’t be held liable for performing the act personally.

When can a POA Become Effective?

Following power of attorney drafting in UAE, the legal document can become effective as soon as concerned parties sign it unless the POA states that it can only come into effect once a future event has occurred. A POA with this condition is called as a springing power of attorney as it only springs into action with a certain occurrence. Most POAs become effective when a principal has become incapacitated, disabled, or incompetent.

What Should I Do When I’m Ready to Perform My Duties as a Power of Attorney Holder in UAE?

After being certain a power of attorney has given you authority in doing what you plan to do, get the original and photocopy of the power of attorney and submit it to a third party e.g. bank. Explain to a concerned party that you’re acting under a POA and principal’s authority and you have been given authorization in performing a particular act that involves the third party.

There are third parties that may ask you in signing a form which states you’re acting properly and in accordance with the law. If you are not sure whether you should sign the form provided by a third party, we suggest you consult with a lawyer.

We know you may have more questions regarding powers and duties of a power of attorney in UAE. Call us so we may address your concerns!